Tricks of the Trade

A few tricks I have learned on this past mini trip, which saved us money, and kept the tribe happy and healthy.

Homemade freeze pops are the bomb, (oops, can I say bomb) on hot days. I made ours out of cranberry juice and a little H2O and the kids loved them. We were out and about, and the kids would get a case of the I wants. I would say, "You can have a freeze pop when we get home", and they were all smiles. It was even a behaviour bribe a couple of times (I know, I shouldn't bribe with food but . . . ). The pops were Super easy to make, the kids even helped make them, and they cost a fraction of the festival pops. We use the Tupperware ones because they aren't in a tray and I can break them apart to get them in those small spots in our trailer freezer. 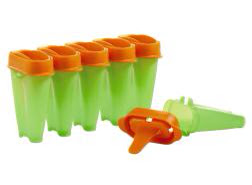 A round pen for the kids to play in. We have two sets of the super yards by north state, with a home made slider gate as the door. Add a few tie straps and you have a great play area for the kids, and even the dogs. This gave them some freedom to run and goof around, and me a break from the constant child check. I do not leave them alone in it and 80% of the time I am sitting in there with them, but it allows me some peace of mind :) 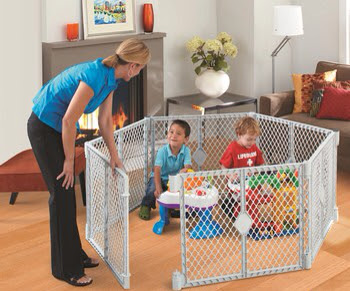 Separate play area for the big kids, so the little ones are not on top of them all the time. Most the time the kids all play well together, but there are times they want to play with little pieces that aren't suitable for the toddlers, and a play center outside the kid corral was really helpful. A sheet over a picnic table is worked great! 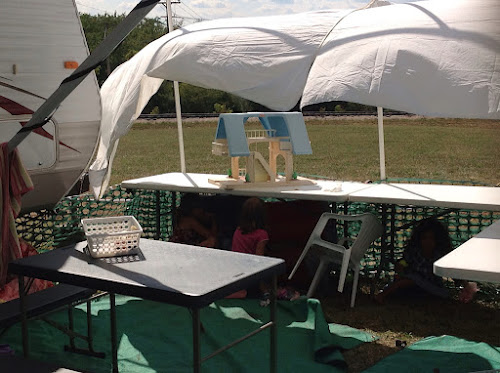 Time-out spot inside the camper. We use 1,2,3 Magic as our primary discipline method, and initially had the time out spot outside on the trailer steps, but because there is still a lot of "stuff" going on outside it didn't turn in to such a removal from the given behaviour. When we moved the the time out spot inside, two things happened 1) the neighbours stopped looking to see what was wrong with our screaming kids, and 2) they were isolated inside when all the fun was outside. Made a HUGE difference! 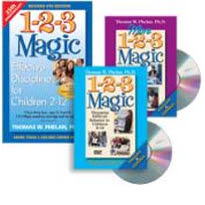 Take snacks into the grounds with you. They don't take very long to make up, the kids stay happy, saves a lot of money, and can be much healthier. I always made sure I had a fruit or veggie, carbohydrate and tried to get a protein in there too. For example, one day we had vegan brownies made in the little square pampered chef cookie sheet, and a bag of frozen fruit. I packed each of the kids brownie in a snack bag, and when they finished there brownie, I open the large bag of frozen fruit and divided it out between them. You could easily do this with peanut butter and crackers, carrot sticks, celery, hummus . . . the list is endless. The frozen fruit was nice because it was a hot day and the fruit was only partially defrosted. This is my favourite vegan brownie recipe right now - they are so yummy. http://gimmesomeoven.com/vegan-brownies/. We also love frozen grapes. We just stick the whole grape container in the freezer and then take them out when we need a nice cool down snack. 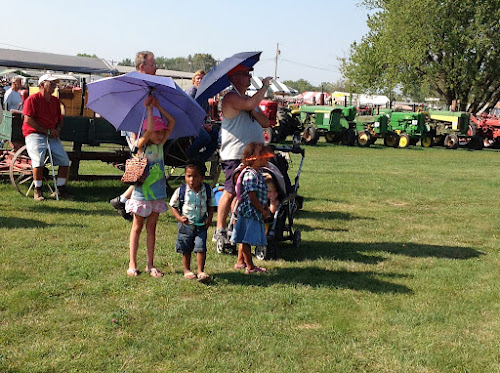 Take umbrellas with you. We use umbrellas rain or shine. They a super great for keeping the sun off you, providing a little privacy for napping babes, great wind blockers, and oh yeah, they keep rain off you too. 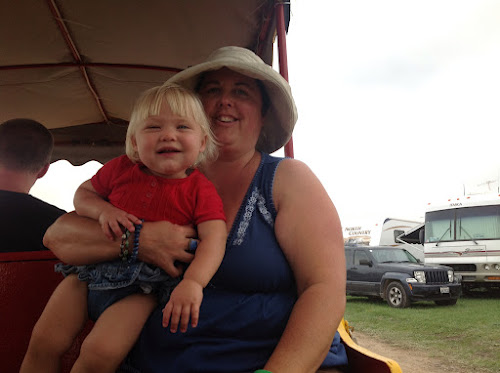 Get out and move. Keeping everyone from getting cabin fever is essential when there are 9 people in a 24 foot trailer, and getting out is key even if it is just to the shower house and back. We would ride the free ground shuttle around and around and around for hours just looking at the different camps and people.
Teach the kids to line up. Thanks to my mom, we started this and boy was it a lifesaver. It was easy to keep track of where they were and kept everyone safe. We even started making a game of it by singing songs and having the kids copy the leader. Most times an adult was in front, but on occasion one of the older girls took the lead, which was even funner for them. John over heard one of our neighbours saying, as I was leaving with my brood, "There goes the pied piper". I don't know if it was ment to be a compliment but I sure took it as one :)

Do you have any tips to share? If so please post, I'm always in search for more.

Posted with Blogsy
Posted by MamaT at 9:47 PM