As we are edging closer to take off, I am getting hardcore about the amount of stuff we are taking.  I am on the third round of clothes sorting, and hopefully the last round of kitchen stuff.

I have been putting off the toy cut as long as I can; mainly because I don't want to listen to the whining and moaning from the kids.  I have known for a while that we have too many toys, and have downsized many times with garage sales, trips to goodwill, and re-gifting; yet, still we have a closet full of toys (thanks to well meaning friends and family).   And today I left the house littered with toys on the living room floor. 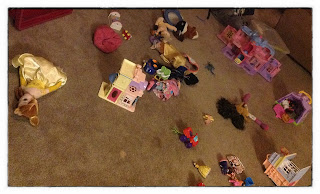 Last week I gave each of the kids a backpack to fill with "things" they couldn't live with out.  What a big mistake!  They filled their packs to the brim, and then some, and since then have been carrying around their worldly goods on their backs.  At first it was funny watching the twins walk with backpacks so heavy they could barely walk upright, but that didn't last long as my mind was spiraling with all the damage those things were doing to their tiny little vertebra, and who knows what else. 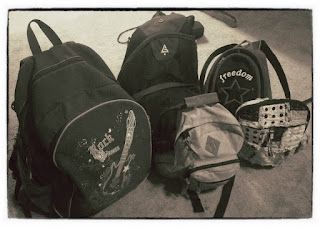 Now the silliness has gone on long enough, I am going to have to cut back on even more toys.

But what to keep and how to do it.  I would love to be the strong arm, rifling through their bags while they sleep; cutting out everything I don't think they need.  Awh, yes that would be the easy thing to do; however, what would that be telling them about how I feel about their most treasured things.  Next I thought about telling them to downgrade to 5 objects, and while I think that is a realistic number, I am not sure they will pick the most educational things to keep.  What happens if they pick 5 pretty ponies and the cute Melissa and Doug dolls get ditched.

So it is with much thought and calculated planning that I have come up with an idea.  I am going to let them widdle it down to 15 items, then I am going to pick 10, then let them pick the last 5.  That way they get to pick first and last, and I get a say in at least some of the items.

Does that seem crazy?  Am I still being too controlling?  Maybe I shouldn't care that they have 5 brown blocks and nothing else, if that is what they really want.  And just maybe getting down to 5 toys is an insane thought to begin with.  Ohhhhhhhh, the agony. Sometimes this minamilist stuff and this parenting stuff is just too much!!!!!