We made a stop in Del Rio before heading out to Big Bend National Park.

We stayed at Laughlin AFB, and enjoyed full hook-ups, cable tv, playground across the street, and a sky filled with aircraft for viewing - all for $15 a night.

I must say, if we weren't heading straight to primitive camping at Big Bend National Park, we would have stayed at one of the primitive sites on the Amistead reservoir, which was beautiful as we passed by. We didn't stop to dilly dally because we had a full days drive to Big Bend, plus we were behind schedule. 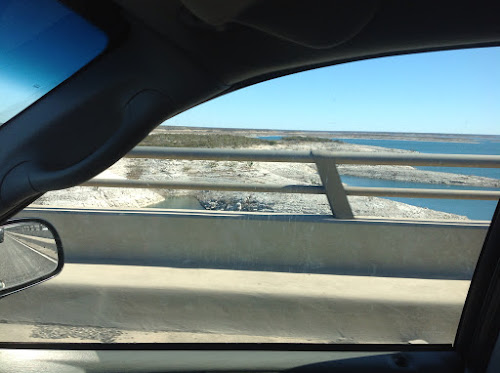 We started out the morning ahead of schedule (a miracle for us) when John noticed that one of ourpassenger tires on the camper was wearing extremely thin on the outside tread. So rather than take the chance of changing a blow out tire on the side of the road, we paid Walmart $11 to put on our regular spare, and it only took about 15 minutes.

There looks to be a lot to see and do in Del Rio, and when we pass through this way again I will definitely plan to spend at least 3 or 4 days here. We could have visited the Reservoir, followed part of the Pecos Trail, and taken in the local historical areas in the town. Also, if you have a passport there is a rather large Mexican town, called Del Rio's sister town. I would have loved to eat some of the local Mexican restaurants and visited the local markets for those yummy mexican pastries.

Posted with Blogsy
Posted by MamaT at 9:34 AM