So Worth the Hike

We started for Boquillas Canyon a little later in the day than we expected but it was so worth it. We had honey straws on a pebbly sandbar with the Rio Grande River babbling past us. However, the start of our journey was not as glorious, and there were moments when I didn't think we were going to make it.

Let me back up a moment. Before we even got to the canyon, while still on the drive down, there is a scenic overlook, and a sign that tells all about how the canyon was formed on a fault line. The sediment lines are horizontal on one side of the canyon and at an angle on the other side.

At the overlook you can see the now almost abandoned Mexican town of Boquillas, which was a thriving tourist stop before the boarder closed after 9/11. You can also see down in the bottom left a few Mexicans, a couple horses, an old truck and some tarps hung from the trees for shade. These guys are keeping an eye out for any tourists who might leave a donation for the wares they have set up on the rocks pictured there in the front. On one of the signs it reads, "donations of clothes, shoes, and food welcome", so the next day we bagged up some of the kids clothes that we were going to take to Goodwill in Tucson. John and Hanna took 6 brown paper bags full of clothes to the look out, held up the bags, and before they even got the bags set down, there were men hoping on horses and racing across the river, which is the boarder, to get the goods. 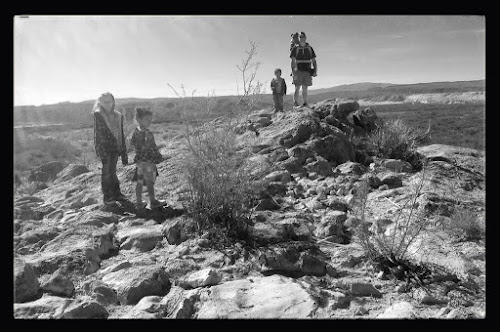 Past the look out point, and down into the canyon, is the trail head parking lot. From the parking lot you look up to the point where we are standing here - that should have been my first clue that this 1.4 mile trip was not the easy hike the literature said it was. The trail began with an almost vertical ascend for what seemed like forever for this out of shape forty something gal who was toting thirty-five pound (each) twins - one on the front and one on the back.

After reaching the summit, the rest was downhill, and a steep downhill with turns and large rocks, which at times seemed worse than the going up.

Then we entered the sunny valley - remember me saying we had gotten a later start than planned; it was high noon when we arrived in the valley, and it was HOT. The saving grace was the lush green vegetation, and the promise of the river in front of us. 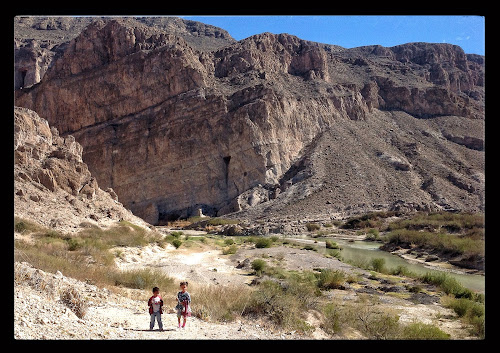 Right before we rounded the last corner, seen to the left, there was an older Mexican singing a sweet song in Spanish in the hopes of getting some donations. We never bring any money with us when we hike, so he was out of luck there but we did promise to bring him some clothes the next day, which is what John and Hanna did after they dropped some off at the look out point. The singer was very grateful for the sacks he recieved. 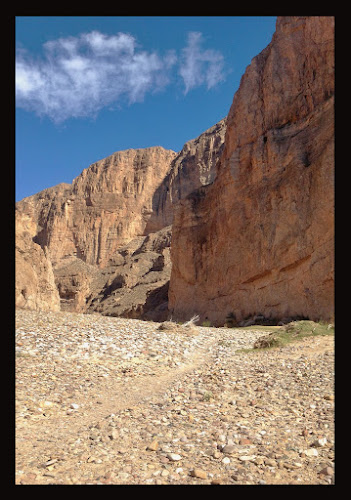 This is the final approach to the river. You can see the layers, which reminded the kids of a cake. 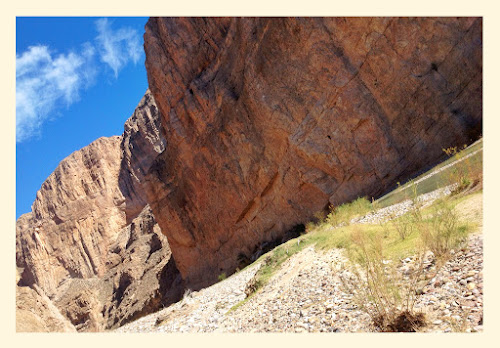 The Rio has a surprisingly green tint from the silt, which is a beautiful contrast to the copper colored canyons. 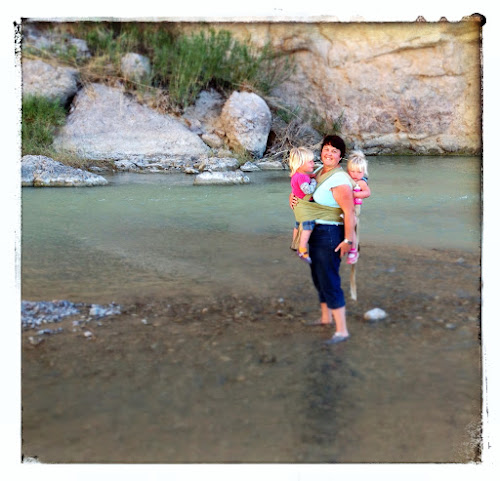 And finally, this is where we stopped to suck on our honey straws. Everyone but John and Ciara waded in the Rio, and enjoyed the shading spot on the river. The only damper on the moment was when John, the glass is half empty kinda guy, said, "You know, we have to climb back up that damn hill to get out of here". To which I replied, "Thanks - I needed that". But in the end, this trip was totally worth the aching thighs and shoulders the next day, and in a few years, when we come back, it will be so much nicer because everyone will be able to walk in and out on their own.

Posted with Blogsy
Posted by Unknown at 9:58 PM