Things have been pretty quiet around here; except for the occasional day trip, we have been sticking pretty close to home. We are keeping busy with yard work on our 40 acres, and just trying to maintain some sense of balance as we fill our calendars with therapy appointments for Ciara, Juice Plus workshops, and swim lessons; you know, that fun summer stuff.

On our recent day trip to Davenport, which is a little over an hour away, we set off early in the morning, so we could make all our big city stops. We needed to stop by Thompson's RV for some lights, and a new screen door handle, and then on to SAM's to get supplies for the month.

The trip started out pretty typical with us running about an hour behind my intended ETA, so we stopped by Taco Bell to get a bean burrito to calm the 7 tummy tigers in the back of the Tahoe. We decided to stop by Thompson's on the way home, which later would prove to be a poor choice, and drove straight to SAM's.

We loaded all the kids in two carts leaving little room for the goods we were about to get, and proceeded to the bathrooms. The bathroom is always the first and last place we visit whenever we go into a store as a group. I think the bathroom break is two fold - it allows the kids to acclimate to being out in public, and eliminates the, "I need to go potty" half way through the store.

We proceeded down the isles, strolling at a leisurely pace, and having as pleasant a time as we could with 7 kids present. Then as we turned the last isle in the back, Freya silently and effortlessly puked her burrito all over John. He managed to make it to a strategically positioned trash can for the second round but that was little help for his already soiled shirt. I then rushed to the cart to grab the damp wash rag I carry in the diaper bag only to realise, no one grabbed the diaper bag from the Tahoe.

After engaging my critical thinking skills, I began to gently remove her dress and pat the puke off her skin with the remaining clean areas of the dress. All this as the occasional shopper passed us silently staring as they tried to figure out what was going on. Finally crisis management was successfully implemented and now on to the exit mission.

John took Freya, and some of the other kids out to the Tahoe, while I quickly wrapped up with an immediate check out. When I arrived to the Tahoe, John was handsomely baring his chest, and Freya was trying to get comfortable enough to sleep. I climbed into the back of the Tahoe and snuggled her as best I could as John drove back home.

As we approached Thompson's, we had to figure out what John was going to do for a shirt, or just go shirtless. The end decision was priceless.

We pulled into Thompson's, John got out, I stripped off my salmon coloured shirt with flowers and gathered shoulders, and John strutted into the store leaving me in my bra snuggling our sick little girl. Once inside he gave the nice sales lady the disclaimer and proceeded with his purchase. 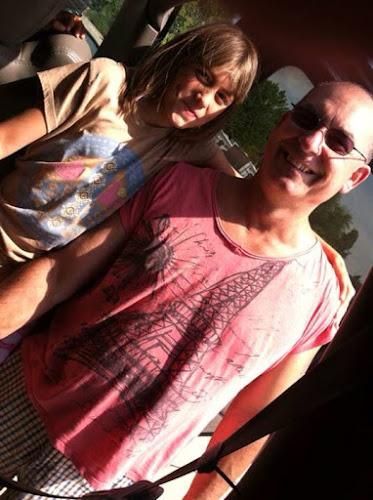 The rest of the trip was uneventful, except for the aroma of half digested burrito for the hour trip home.

Posted with Blogsy
Posted by MamaT at 3:20 PM