Mt. Lemmon was on my list of things to do but with three days left to our stay it looked like we were not going to make it. I had scratched it off, and moved it to the "Something we will do the next time we are in Tucson" list.
Then, at one o'clock in the afternoon, mom came over, and we decided to go for it. My mom and I packed the kids in, leaving John and Ciara at home, and headed for the mountain. It was 92 degrees when we left the base.
I was a bit nervous about driving, since I am a scaredy cat when it comes to heights; however, mom and I made a deal that she would tell me when not to look, which work pretty well except when she forgot to tell me.
Two hours later, we arrived at the top of the mountain and it was 53 degrees with snow everywhere. The kids actually got out and threw snowballs at each other. It would not actually take someone two hours to get to the top but we stopped at almost all the scenic pullovers, and scoped out a couple campgrounds along the way, with the first one, Molino Basin being our favorite.

At the top of mountain, sits a cute little resort type of town, and we had two wonderful cookies at the pizza an cookie cafe, The Cookie Cabin. We sat and enjoyed good food and good company.

There is also a ski resort, Ski Valley, and the kids were able to play in the snow and we had a fun snowball fight.

We decided that we had to go home at some point, and I really wanted to get off the curvy mountain road before before dark. We were actually able to watch the sun set as we neared the base of Mt. Lemon.
And we were not the only ones enjoying the sunset on the mountain.  As we were coming down, we spotted several groups repelling or climbing the rock formations.
Mt. Lemon ended up being on of the best days of our trip to Tucson, even though we spent most of the time in the vehicle. I think it was the first real day mom and spent together without the kids interrupting constantly. We also laughed so hard I almost peed myself several times. It was a real Thelma and Louise kinda day, and there were moments when I thought we were going over the edge.

Pictures are thanks to my mom - Kathy Schnedler.

Posted with Blogsy
Posted by MamaT at 3:55 PM No comments:

The Tucson zoo is the perfect size for kids of all ages, and the activities they have are pretty awesome. 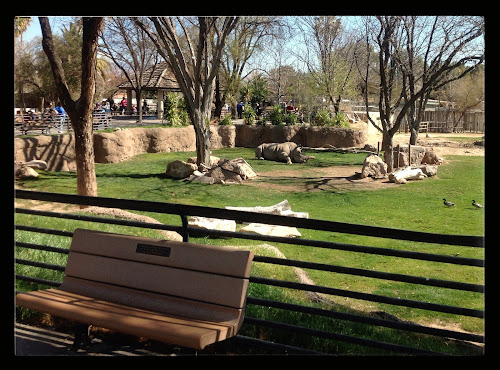 One of the most memorable areas for us is the elephant area. The Reid zoo has a nice area set aside for the elephants, and an interesting zoo keepers presentation, as well as an interactive educational area. The favorite for all the kids seems to be the wall mounted elephant butt. The butt is pressure sensitive, so when it is hit in different areas, the butt makes different elephant noises - we laughed and carried on with that butt for quite some time, and the twins had to be dragged away from it. 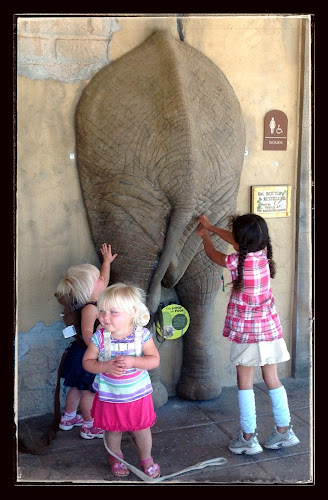 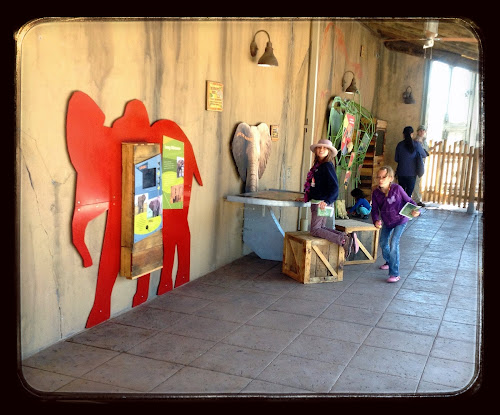 There is also the other typical exhibits with a learning building in the middle of them. In this building the kids get to see monkeys up close, draw marine wildlife, and pet a few small domestic animals. There are wonderful stations set up for the kids to sit and reflect on what they are observing. 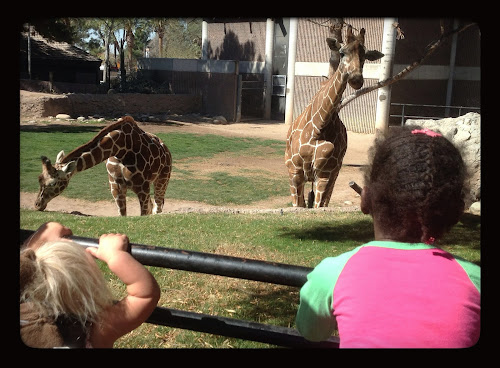 We spent the whole day at the zoo, which was surprising because I really thought the little ones wouldn't last much past lunch time. But because there are plenty of spaces created for them to stop and relax along the route, we were able to keep them engaged the entire time.

Also an added bonus we enjoyed were the key stations along the way. When we checked in at the gate, we got a key for two dollars, which we can use over and over at the zoo. Then as we walked the route, there were station boxes where we inserted the key, and a recorded message from a zoo keeper talked about the given animal. It was interesting because the information wasn't just the facts about the species but was personalised to the specific animal we were observing. Well worth the extra bucks. The Reid zoo is also on our Niabi zoo reciprocal list, so we got our whole family in for FREE.

Posted with Blogsy
Posted by MamaT at 4:38 PM No comments: